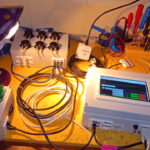 Hello, maybe someone can help me, im trying to control 8 relais (2x4 relay card) with the port expander. I can switch the relays independently from each other, that works.

But one strange thing is when i plug a 230v device in (a fan for testing) i can activate it once, then turning it off, but when i try to turn it on again the relay led gives a short flash and relay clicks shortly but it doenst stay on.

After some on/off switching in the UI it normally turns on again, after that the Game repeats..

Its strange because relays without load works Fine.

Anyone knows whats going on here?

Update: i noted that when some relays are on and i then switch the fan relay on, all relays turn off but stays active in mycodo. I dont know where to Start searching for the reason anymore.

This topic was modified 3 weeks ago by danton
Quote

Can you link to the product you're describing, attach an image of your setup, and describe the connections?

Hello, thanks for your fast answer, fortunately i was able to solve the Problem.

The pcf module cant handle the current needed for all of the relays so when some are active it happens that theres not enough current left and some relais click like they want to close but cant hold the relay closed.

I just added a sencond pcf module With the same adress so i still need only one controller in mycodo which switches both of them at the same time.